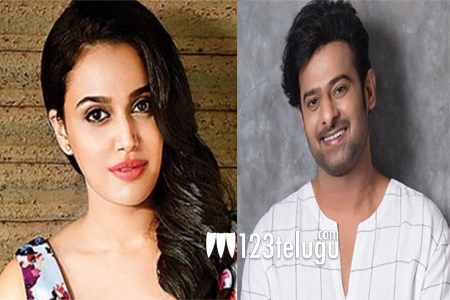 With his majestic performance as Amarendra Baahubali in the Baahubali franchise, Prabhas attained a huge fan following across the country. Not only the common people, Prabhas’ charms had wowed even several celebrities from other film industries.

Talented Bollywood actress Swara Bhaskar claimed that she had a big crush on Prabhas after watching Baahubali. “I had seen the part 1 nine times and part 2 eight times and had a huge crush on Prabhas. My father is from Vizag and I remember watching Nagarjuna sir’s Shiva and Venkatesh sir’s Chanti in Vizag doing the summer holidays in my childhood,” said the Veere Di Wedding actress.

When asked if she is interested in acting in Telugu movies, Swara said that she would love to act in Telugu and hoped that Tollywood filmmakers will approach her with exciting scripts. “That way I can make my father and his family in Andhra happy,” she said, interacting with the media at an event in Hyderabad today.