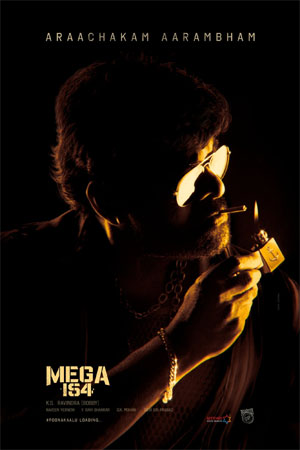 Megastar Chiranjeevi is setting a unique record this December, by shooting for his four upcoming movies in different schedules. One among the four projects in Chiru’s enviable line-up is the as-yet-untitled mass action entertainer under Bobby’s direction. This crazy project marks Chiru’s 154th film in his career.

And here’s an exciting buzz that’s doing the rounds in film circles. Rumors have it that Chiru154 is set in the backdrop of Sri Lankan coastal area. Furthermore, Chiru will be seen as an undercover cop in the movie. Chiru had played an undercover cop in his yesteryear hits like Rustom and State Rowdy. It’ll surely be a thrilling experience for fans to see the Megastar don a similar role after a long time. Also, Chiru will be sporting an ultra mass get-up as a fisherman for the most part of the movie.

Mythri Movie Makers banner is bankrolling this high budget action entertainer. Waltair Seenu and Waltair Veerraju are the titles under consideration for the movie.