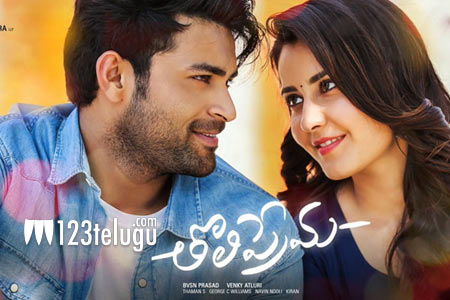 Young hero Varun Tej has just scored his 3rd half a million dollar movie in the US. The Mega hero’s latest film, Tholi Prema, has collected $208,456 from 100 screens until 10:30 PST on Saturday and took its latest collections to $500,446 in the US.

Tholi Prema has had a solid opening and collected $152,170 from the Thursday night premiere shows. The film went on to collect $139,820 on Friday. After the $2.07 million Fidaa, Varun’s Kanche is his second film to collect over $500K in North America. At this pace, Tholi Prema will surely break into the $1 million club in its full run.

Actor Venky Atluri has made a solid directorial debut with Tholi Prema. Raashi Khanna has impressed everyone with her looks and performance. Senior producer BVSN Prasad has bankrolled the movie, which has a super hit soundtrack by Thaman.