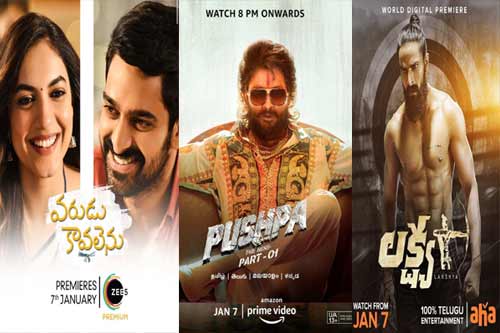 A total of three new notable Telugu OTT titles are premiering today. The biggest title on the list is obviously Allu Arjun’s Pushpa: The Rise.

Pushpa: The Rise will be available for strangers on Amazon Prime Video from 8 PM today, 7th January.

Naga Shaurya has two OTT outings today. Both of his recent theatrical outings Varudu Kavalenu and Lakshya are premiering on OTT today.

While Varudu Kaavaleu is a ZEE5 exclusive release, Lakshya is an Aha Video release.

Can these three mainstream Telugu films impress the Telugu OTT audience? We have to wait and see.