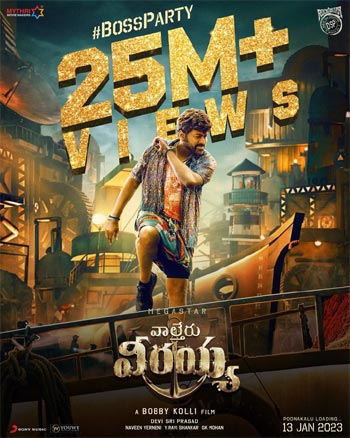 Megastar Chiranjeevi shared a lovely update that his son Charan is becoming a father which gave a high joy to the fans. He will be next seen in Waltair Veerayya, and the makers have already begun the promotions by releasing the first single, Boss Party.

The song gave a superkick to the masses who have been grooving and making Reels on it. The latest update is that the song amassed 25 million views on Youtube and is still trending on the social platform. The splendid tunes and catchy lyrics by Devi Sir Prasad made the song super special.

Shruthi Haasan plays the leading lady, while Mass Maharaja Ravi Teja will play a cop role in this action flick. Bobby of Power fame is directing the film, which is produced by Mythri Movie Makers. The film releases on 13th January 2023.