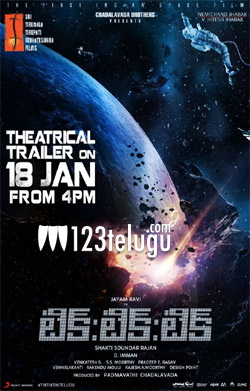 Tik Tik Tik is India’s first space movie. The Tamil film will soon be dubbed in Telugu and the latest we hear is that the first look trailer of the film will be out on the 18th of this month.

Jayam Ravi and Mental Madhilo fame Nivetha Pethuraj play the main leads. The film will have some top-notch VFX work and will release on January 26.

The film has beeb directed by Shakti Soundar Rajan and Padmavati Chadalavada is presenting us the Telugu version.