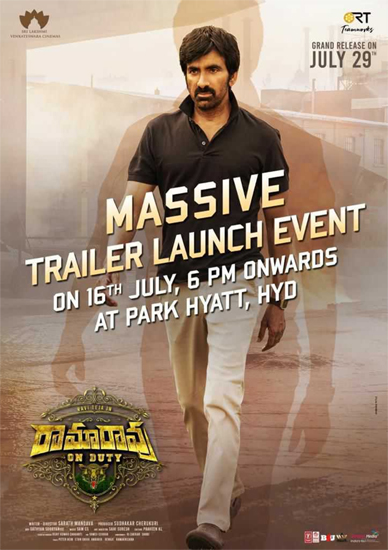 Mass Maharaja Ravi Teja will be entertaining the audiences with his next flick Ramarao On Duty from July 29th. The actor will play an honest civil servant in this action drama helmed by Sarath Mandava. Well-known actor Venu Thottempudi is making his comeback with this film after a very long gap.

Now the latest update from the makers is a grand event is being planned for the trailer launch at Park Hyatt, Hyderabad on 16th July from 6 PM onwards. Kaushik and Rajisha Vijayan are playing the female leads. Sudhakar Cherukuri is producing the movie under SLV Cinemas and RT Team Works, and its music is composed by Sam C.S.

It stars Nasser, Naresh, Pavitra Lokesh, and Sarpatta John Vijay in other crucial roles. The songs and teaser released so far have fetched a solid response. With the trailer release, the hype is expected to go on to the next level.