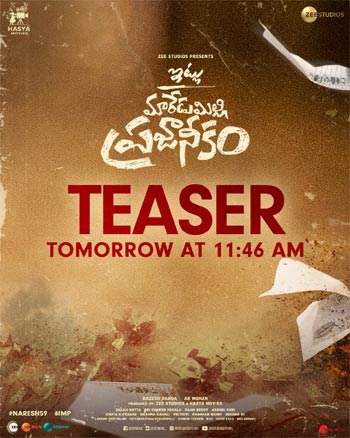 Allari Naresh will be next seen in the movie ‘Itlu Maredumilli Prajaneekam’. The makers of the film released a pre-teaser yesterday and confirmed the teaser release date as June 30. Now the makers have come up with another interesting update. They announced that the teaser will be out at 11:46 AM tomorrow. A poster was released to announce the same.

Zombie Reddy fame Anandhi is playing the leading lady in this film. The movie stars Vennela Kishore, Praveen, and Sampath Raj in other key roles. The film is produced by Rajesh Danda under Hasya movies. AR Mohan is directing this film. Keep watching this space for further updates.