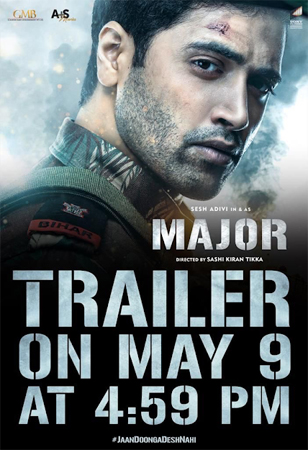 Young and promising actor Adivi Sesh’s Major is all set for a grand theatrical release on June 3, 2022. Written and directed by Sasi Kiran Tikka, the movie’s trailer will be out tomorrow.

Now, the makers have come up with another interesting update. They announced that the trailer will be released at 04:59 PM tomorrow. There is no info on who will release the trailer.

Sairee Manjrekar and Sobhita Dhulipala are the female leads in Major. Having Sricharan Pakala’s music, the multilingual film is produced by Sony Pictures Films India, GMB Entertainment and A+S Movies.