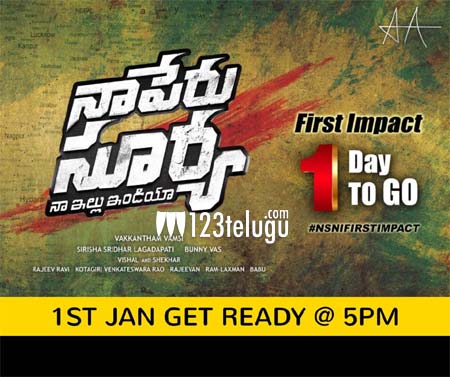 The highly-anticipated ‘first impact’ of Allu Arjun’s ongoing film, Naa Peru Surya Naa Illu India, will be released on January 1st, as a New Year treat for fans. The ‘first impact’ is said to be a short video, and the latest update is that it will be unveiled at 5 pm on January 1st.

Allu Arjun will be seen as an army man in Naa Peru Surya. He will sport a never seen before look in the movie. Writer Vakkantham Vamsi is pulling out all stops to make NPS a memorable treat for fans. The film is slated to hit the screens on April 27, 2018.

Happening young beauty Anu Emmanuel is the film’s leading lady, while Action King Arjun is essaying a crucial role. Bollywood composer duo Vishal and Shekhar are scoring the music. Lagadapati Sridhar is producing the movie and Naga Babu is presenting it.