Title and first look of Dhanush’s next unveiled on his birthday
Published on Jul 28, 2021 4:00 pm IST 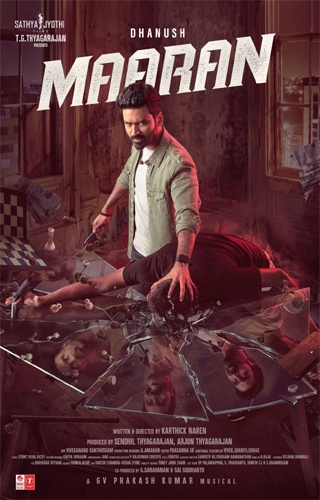 On the occasion of Kollywood star Dhanush’s birthday, the makers of his ongoing 43rd film unveiled the film’s title and first look poster. D43 is now titled Maara, and the impactful first look poster features Dhanush in an angry young man avatar, as he holds a knife in one hand and smashes a person’s head on to a glass with his other hand. Dhanush’s different expressions in the broken glass pieces raise curiosity on the film’s plotline.

Maaran has Master girl Malavika Mohanan as the female lead. Young directing Karthick Naren and his team are currently filming in Hyderabad. Sendhil Thyagarajan and Arjun Thyagarajan are bankrolling the film under Sathya Jyothi films. Touted as an investigatuve thriller, Maaran has GV Prakash Kumar scoring the music.
Attachments area