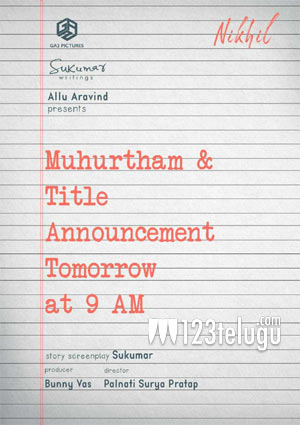 It is a known fact that the young hero, Nikhil is doing a film in the production of Geetha Arts and Sukumar Writings. The film was also announced a while back.

Now, the latest we hear is that the film’s title will be launched tomorrow morning along with the mahurat of the film. Bunny Vas is the producer of this film.

Surya Pratap who made the hit film, Kumar 21 F is helming this film as well. The film has a story and screenplay by Sukumar. The film will go on sets very soon.