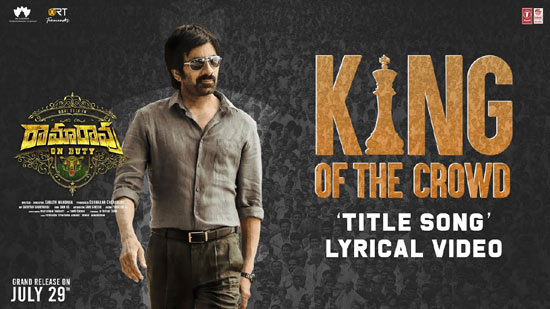 Mass Maharaja Ravi Teja has surprised his fans and movie buffs with the theatrical trailer of Sarath Mandava directed Ramarao On Duty. It’s not a regular commercial potboiler, and the film has a strong content, which was evident through the trailer.

The makers, as part of promotions, released the title song- ‘King Of The Crowd’ today. The song talks about the superior qualities of the character Ravi Teja played in the movie.

Sam CS rendered a perfect track for the title song. Sarath Mandava’s lyrics epitomizes Ramarao and Ravi Teja’s rare qualities. Lavita Lobo has crooned the number with high pitch vocals. It will be much more pleasing to see the song with full montages on screen.

Rajisha Vijayan and Divyansha Kaushik are the other heroines, while Venu Thottempudi will be seen in a vital role in the movie produced on grand scale by Sudhakar Cherukuri under SLV Cinemas and RT Teamworks banners. Sathyan Sooryan ISC is the cinematographer, wherein Praveen KL is the editor of the movie slated for release on July 29th.