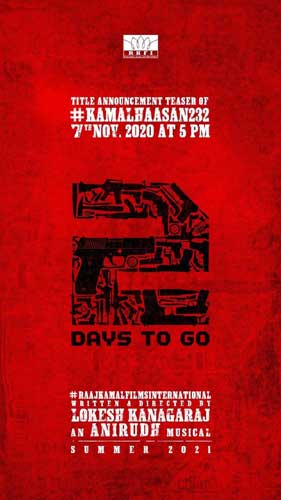 By now, everyone knows it that a film in the combination of Tamil star Kamal Haasan and young filmmaker Lokesh Kanagaraj was formally announced a few months back. Meanwhile, the latest news is that the film’s title announcement teaser will be released on November 7th at 5 PM.

Touted as a dark thriller, the film marks is Kamal Haasan 232nd project. Rockstar Anirudh will be scoring music for the film.

Kamal himself is bankrolling the film under his RK Films banner. More details regarding the movie are awaited.