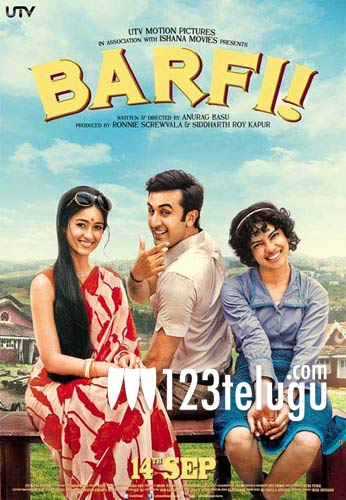 Ranbir Kapoor’s latest film Barfi seems to have impressed a lot of celebrities in Telugu film industry. Directed by Anurag Basu, the film has Ranbir Kapoor, Priyanka Chopra and Ileana in lead roles. The film opened all over the world on September 14 and the early buzz about the film is extremely positive. Several celebrities from Telugu film industry, who saw the film, couldn’t stop raving about Ranbir Kapoor’s phenomenal performance in the film. Here are some of the tweets we came across :

@LakshmiManchu – #Barfi wow!! bow down to the team. killed me w love. beautiful. must watch.

@ritubarmecha – What a Beautiful film with amazing performances. #barfi

@VeeruPotla1 – #Barfi is a must watch for unbelievably believable performance of Priyanka alone . Ranbhir is a bonus .

Earlier this year, Tollywood celebrities went gaga over Ishaqzaade and many began to make inquiries about Parineeti Chopra and the remake rights of the film. What remains to be seen is whether someone considers remaking Barfi in Telugu or not, given the amount of buzz it has generated all over the country.