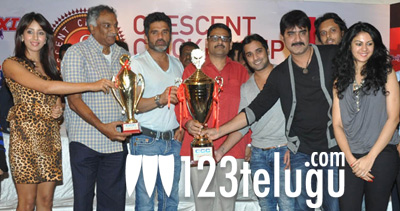 Ask any Indian what two things he/she loves most and the most likely answer would probably be ‘Cricket’ and ‘Movies’. Imagine the adrenaline rush for fans if both platforms combine, involving stars from Bollywood and Tollywood.

Stars from the two Film Industries will face off in the game of cricket at L.B. Stadium in Hyderabad on the 23rd of this month. Sunil Shetty is the captain of the Bollywood team and Srikanth is leading the Telugu heroes. The trophy unveiling ceremony took place in Hyderabad on Tuesday and the event was attended by many celebrities. Sunil Shetty said “This is an event that is going to help the poor with the proceeds from the match. It will take place in an entirely new format with the title ‘T-10 Super Test’. We believe fans will be excited by this event”.

Srikanth also spoke at the event “Last year, many Telugu players participated in the Crescent Cricket Cup match held in Anantapuram. We are looking forward to the match against the Bollywood team this year”.