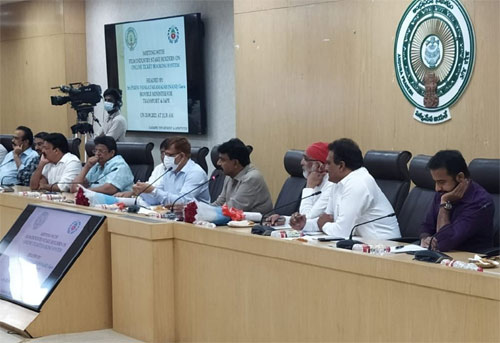 The ticket pricing issue has been going on for a long time now in AP. Many big releases have been stalled due to this issue. AP CM, YS Jagan had invited Chiranjeevi to head a delegation and discuss the key issues with him.

So, as a part of it, the meeting was fixed today and transport minister, Perni Nani was made the chief where he would hear out the problems of the Telugu film industry.

The meeting is now done and the government has revealed that there would be a proper government-based portal to sell movie tickets in AP in the days to come. So, the so-called big online private portals will no longer work in AP if this GO comes into existence.

As the industry heads also asked to allow 100% occupancy and daily 4 shows from the 24th of this month as Love Story is releasing, Perni Nani promised that he would speak with the health officials and if they give a green signal, then he would discuss the 100 percent occupancy with CM as well.

One should remember that the ticket rates in AP were slashed big time during Vakeel Saab and to revoke back to higher prices, the delegation spoke to Nani about the same.

The minister has patiently listened to these problems and promised the Tollywood biggies that they would come with a feasible solution very soon.