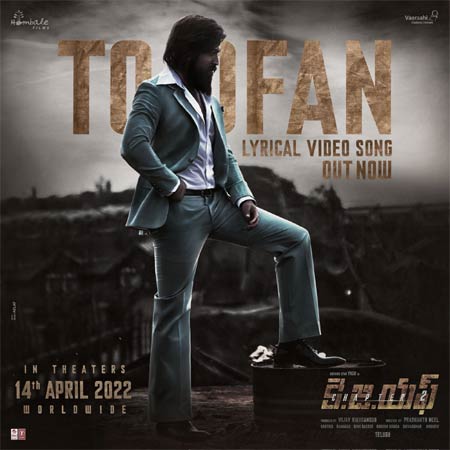 Entire India is eagerly waiting for Yash starrer KGF: Chapter 2. Directed by Prashanth Neel, the movie is up for a grand release in theaters worldwide on April 14, 2022.

Ahead of the release, the makers have unveiled the first song from the movie, today. Titled Toofan, the track is composed by Ravi Basrur. Sung by Sri Krishna, Prudhvi Chandra, Arun Kandinya and others, the song is a mass track that elevates the heroism of the protagonist. Ramajogayya Sastry’s lyrics are so good.

Srinidhi Shetty played the leading lady in this multilingual movie. Rao Ramesh, Raveena Tandon, Sanjay Dutt and Prakash Raj are also a part of this magnum opus, produced by Hombale Films on a grand scale.