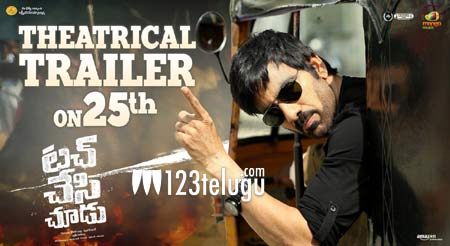 The much-awaited theatrical trailer of Ravi Teja’s upcoming action entertainer, Touch Chesi Chudu, will be released on January 25. The exact time of release will be revealed soon. The film’s teaser and the title song, which were released earlier this month, raised expectations on the movie.

Touch Chesi Chudu is hitting the screens on February 2. The Mass Maharaja will be seen as a cop in the movie. His lean and menacing avatar in the teaser got his fans excited. The film’s post-production formalities are going on in full swing currently.

Touch Chesi Chudu has Raashi Khanna and Seerat Kapoor as its leading ladies. Writer Vikram Sirikonda is making his directorial debut with the movie, while Nallamalupu Srinivas and Vallabhaneni Vamsi are producing it. Bollywood composer Pritam has scored the film’s soundtrack.