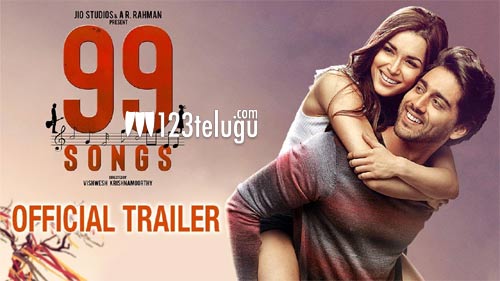 It’s been earlier reported that Oscar-winning music composer AR Rahman is turning producer with a romantic musical, titled 99 Songs. AR Rahman is bankrolling the movie under his YM Movies banner. He has also penned the film’s story.

Rahman took to Twitter and launched the theatrical trailer for 99 Songs this evening. The trailer showcases an intense musical and romantic journey of a young man who believes that music is the biggest magic in the world. Newcomers Ehan Bhat and Edilsy Varghese’s intense relationship has been portrayed in an intriguing manner. As expected, Rahman’s impressive soundtrack adds depth to the proceedings.

Lisa Ray, Manisha Koirala, music composer Ranjit Barot and Indian Ocean’s Rahul Ram will be seen in prominent roles. The film is directed by Vishwesh Krishnamoorthy. 99 Songs will also be releasing in Telugu.