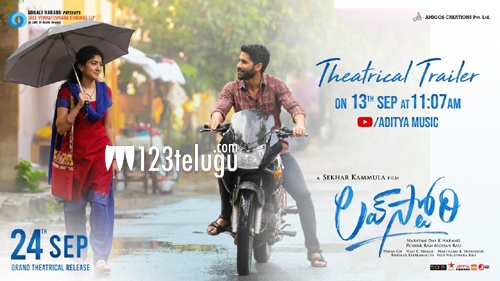 Young stars Naga Chaitanya and Sai Pallavi’s Love Story is one of the most eagerly awaited movies of this season. The Sekhar Kammula directorial is slated for release on September 24. Meanwhile, Chay took to Twitter just a while ago and announced the film’s trailer launch date.

“Theatrical Trailer of Revanth and Mounica’s #LoveStory on Sep 13th at 11:07am,” tweeted Chay. Love Story is touted to be a slice of life romantic drama and it’s loaded with Sekhar Kammula’s signature earthy emotions and romance.

Debutant Pawan CH’s Saranga Dariya song has been a chartbuster and raised expectations on the movie. Narayan Das Narang and Puskur Ram Mohan Rao have produced the movie in association with Sekhar Kammula’s Amigos Creations.