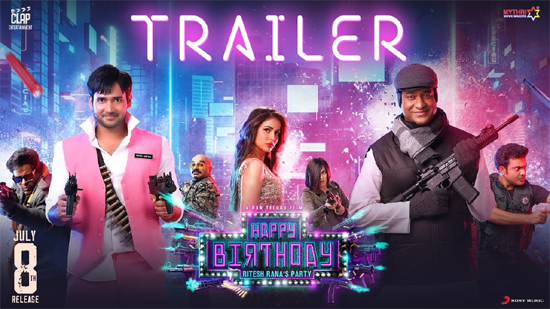 The pride of Indian cinema SS Rajamouli has launched the trailer of Lavanya Tripathi’s upcoming movie, Happy Birthday. Written and directed by Ritesh Rana, the movie is all set to hit screens on July 8, 2022.

The trailer looks engaging and promises an out-and-out entertainer. Though the trailer reveals not much information about the characters and behaviours, it showcases that there is a pub called ‘POSH’ where people are not allowed without a gun. The key characters in the movie try to steal a diamond-studded lighter. Who are they? Why do they want to steal it? What actually happened in the pub? All these answers will be known in the main film.

The well-cut trailer is packed with comedy, crazy one-liners, and action sequences. The team Mathu Vadalara has reunited to offer double entertainment with this movie. Naresh Agastya, Satya, Vennela Kishore, Gundu Sudarshan and others played key roles in this movie.

Produced by Chiranjeevi (Cherry) and Hemalatha Pedamallu under the banner Clap Entertainment, the movie is presented by Mythri Movie Makers. Kaala Bhairava composed the music for this comedy film.