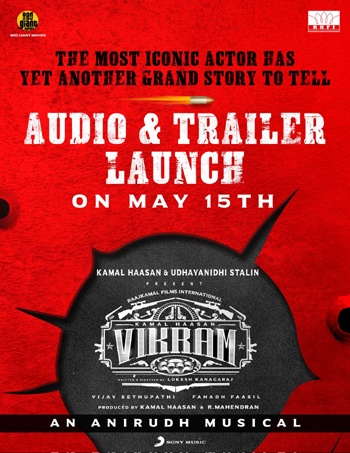 Universal actor Kamal Haasan will be seen next in Vikram, directed by Lokesh Kanagaraj. The high-voltage action entertainer also has star actors Vijay Sethupathi and Fahadh Faasil in significant roles.

Today, the makers have announced that the theatrical trailer of Vikram and its audio will be released on May 15, 2022. A poster has also been released to announce the same.

Produced by Kamal Haasan and R. Mahendran under the Raj Kamal Films International banner, the movie will be released in all major South Indian languages and Hindi. Anirudh Ravichander has rendered the music for this flick, scheduled to hit screens on June 3, 2022, worldwide.