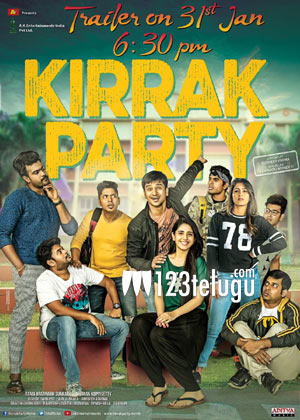 Hero Nikhil’s upcoming campus drama, Kirrak Party, is fast nearing completion. The film is an official remake of the blockbuster Kannada film, Kirik Party. Nikhil will be seen as a student leader in the movie and he has undergone a striking image makeover.

As per the latest update from the makers, Kirrak Party’s theatrical trailer will be released on January 31 at 6:30 pm. Kannada starlet Samyukta Hegde and Hindi TV actress Simran Pareenja are the leading ladies in the movie. Anil Sunkara is producing the movie, while debutant Sharan Koppishetty is directing it.