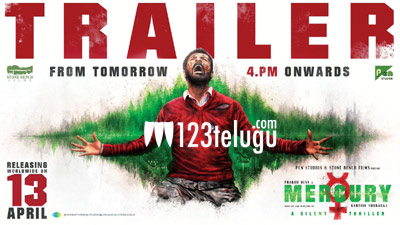 Recently, Rana Daggubati unveiled the impressively different teaser of Prabhu Deva’s upcoming horror-thriller, Mercury. This ‘No Language Film’ is a silent film and it will release across the country on Friday the 13th of April.

As per the latest updates, Mercury’s trailer will be unveiled tomorrow (April 5) at 4 pm. Prabhu Deva will be seen as a zombie in the film. Karthik Subbaraj of Pizza and Jigarthanda fame has directed the movie and Pen Studios and Stone Bench Films have jointly produced it.