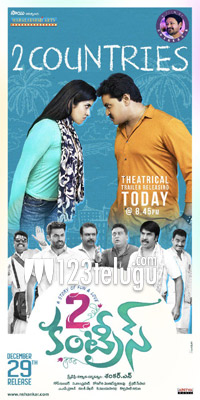 Comedian turned hero Sunil’s soon to be released film, 2 Countries, is slated for a December 29 release. The film’s teaser was unveiled by Power Star Pawan Kalyan a few weeks ago. 2 Countries is an official remake of the super hit Malayalam entertainer of the same title.

According to the latest update from the film’s team, 2 Countries’ theatrical trailer will be released tonight at 8:45 pm. Popular director N Shankar, who had directed Jai Bholo Telangana and Sriramulayya in the past, has directed and produced 2 Countries. Debutant Manisha Raj is the film’s leading lady.