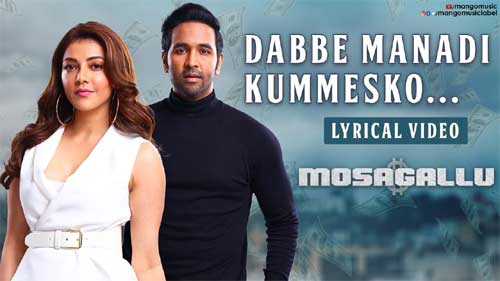 The lyrical video for ‘Dabbe Manadi Kummesko’, the title song from hero Vishnu Manchu and Kajal Aggarwal’s upcoming thriller, Mosagallu, was unveiled on February 11th. The song has been getting a tremendous response and the film’s team couldn’t have been more thrilled.

Dabbe Manadi Kummesko lyrical video explains the protagonist’s excitement and aspirations when a huge amount of money suddenly lands in his lap. Noted young playback singer Hemachandra has pumped energy into the lyrics penned by Sri Sri and popular Kollywood music director Sam CS has taken the song to the next level with his orchestration.