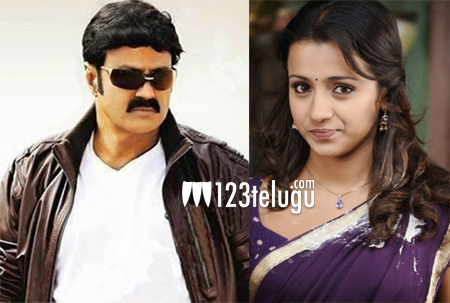 Super star Trisha, has joined the shooting for Balayya’s next untitled film. The shooting is currently taking place near Rampachodavaram. The unit wanted a forest location and the team has zeroed in on Maredmally , which is close by Rampachodavaram.

Trisha joined the sets few days back, and on the very first day, rain halted the shoot of this film. In fact in the last 4 to 5 days, the unit were able to shoot only for a day, and had to retire to her hotel in Rajamundry most of the time.

The unit has initially planned to shoot an action scene with Balayya and Trisha, few talkie scenes and a song there. The rains have caused a delay in the shooting. Now the unit plans to shoot the action scene there, if rain still causes an issue, they might come back to Hyderabad and the shoot the rest in the city.

This movie will be Balayya’s first release after the elections, and also has high expectations post the success of Legend. It will be interesting to see if the director can churn out yet another commercial potboiler for Balayya.