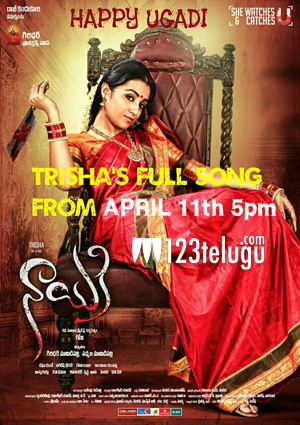 It is well known that gorgeous Chennai beauty Trisha turned playback singer recently and crooned for a single in her upcoming bilingual horror drama, Nayaki. The song was composed by Telugu composer Raghu Kunche.

According to a latest update, this single song by Trisha will be released on April 11th. Recently, the Nayaki team released the film’s teaser to a decent response and the teaser has clocked nearly 4 lakh views and raised the curiosity levels among the actress’ fans.

Govi is the film’s director, while Giridhar and Padmaja produced it. Nayaki will hit the screens simultaneously in Telugu and Tamil very soon.