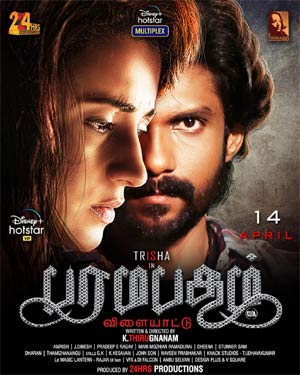 Trisha starrer Paramapadham Vilayattu is all set to release on Disney Hotstar on April 14. The film was initially slated for release in February, 2020; however, it was postponed at the last minute. Now, the makers have announced that Hotstar is going to stream the film as a Tamil New Year special.

Directed by Thirugnanam, the film has Trisha and Nandha Durairaj in lead roles, and it is said to be a gripping thriller and a murder mystery. Incidentally, it’s the 60th film in Trisha’s career and it will be streaming in Tamil, Telugu, and Malayalam simultaneously.

Meanwhile, the actress is playing a key role in Mani Ratnam’s adaptation of Ponniyin Selvan, and she has four other films lined up for release.