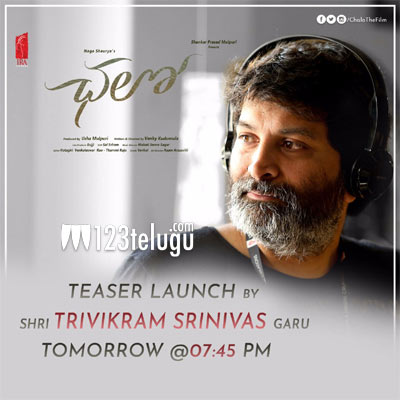 Young hero Naga Shaurya’s upcoming romantic drama, Chalo, is gearing up for a December 29 release. Chalo is a youthful campus entertainer, which is set in a village named Thirupuram on the Andhra-Tamil Nadu border.
According to the latest update from the makers, Chalo’s teaser will be unveiled by maverick director Trivikram Srinivas at 7:45 pm tomorrow. Incidentally, Chalo is directed by debutant Venky Kudumula, who worked as an Assistant Director in Trivikram’s team.

Kannada beauty Rashmika Mandanna plays the female lead in this film, while Naga Shaurya’s parents are producing this movie under Ira Creations banner.