Two star heroines in race for female lead’s role in Chiranjeevi’s next
Published on Feb 10, 2021 7:05 am IST 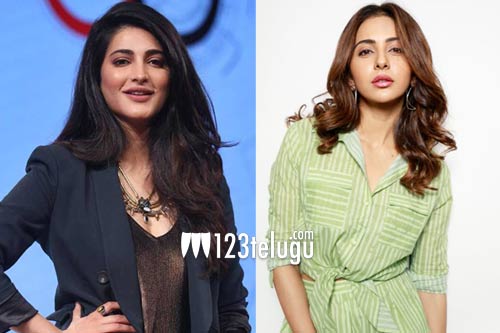 Megastar Chiranjeevi has signed a handful of exciting projects, much to the joy of his fans. After Acharya, he has Lucifer’s remake, Vedalam remake and a film with Sardaar Gabbar Singh and Venky Mama director Bobby. Chiru recently revealed that leading banner Mythri Movie Makers will be bankrolling the project.

Now, according to the latest buzz in film circles, star heroines Shruti Haasan and Rakul Preet Singh are in the race to grab the female lead’s role opposite the Megastar. Both Shruti and Rakul are already busy with several films down south and in Bollywood. We will have to wait until the makers come up with an official announcement about the film’s leading lady. This as-yet-untitled film will be going on floors in May.