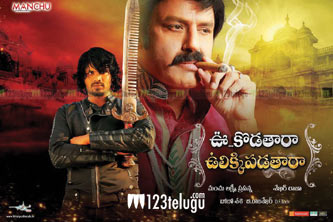 Manchu Manoj, Balakrishna starrer Uu Kodathara Ulikki Padathara has taken a good opening all across the state. Directed by Sekhar Raja, the film was produced by Lakshmi Manchu. Recently, on the day of its release in couple of leading theatres in Chennai, the film opened to a packed house and much to the delight of Lakshmi Manchu and her team, theatre owners in Chennai decided to extend the film’s screening for the entire week. “Casino and satyam in chennai had amazing openings for #UKUP so satyam is extending our shows for whole week.. Love my chennaites,” Lakshmi Manchu posted on Twitter. We hear that the entire team of the film is quite happy with the film’s openings and now they are tried their best to stop piracy of their film. Bobo Sashi had composed the music of this film and Rajasekhar was the cinematographer.