It is well-known that Super Star Rajinikanth’s soon to be launched movie in Kabali’s director Pa Ranjith’s direction and Dhanush’s production will have an extensive Mumbai underworld backdrop. A huge Dharavi slum set is being erected in Chennai for this purpose.

Rajini’s character is rumored to be modeled after the well-known Mumbai mafia don Haji Mastan. Now, a man named Sundar Shaekhar, claiming to be Haji Mastan’s foster son, has served a notice to Rajinikanth.

In his notice, Sundar strongly opposed ​the makers’ plans and asked Rajinikanth not to depict Haji Mastan Mirza as a ‘smuggler and an underworld don’, adding that his father was never convicted by any court in cases related to smuggling or underworld.

Sundar further said that Haji Mastan founded the Bharatiya Minorities Suraksha Mahasangh and that there is a huge political party behind him. He further offered​ to provide the real-life story of Haji Mastan Mirza, and even produce the film as he also happens to be a producer. 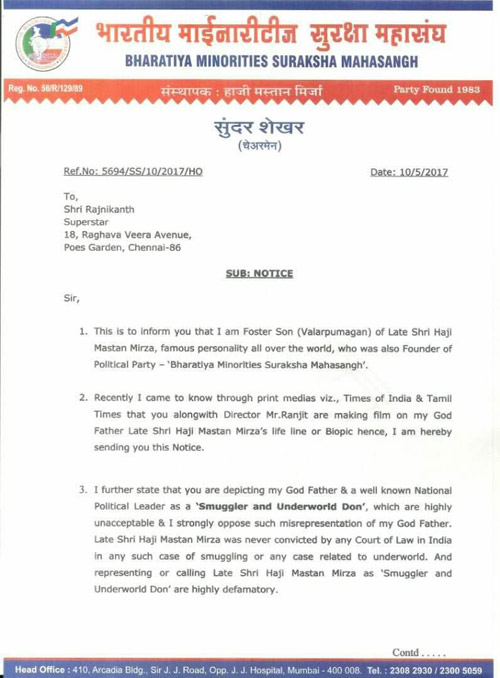