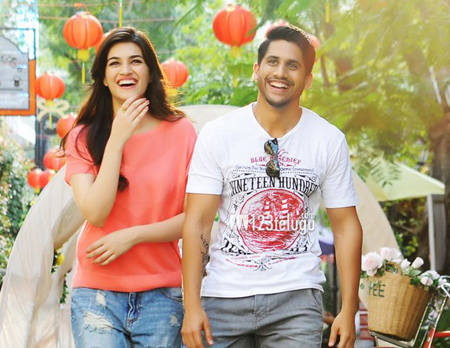 As the film’s audio launch date is fast approaching, the makers of Naga Chaitanya and Kriti Sanon starrer ‘Dohchay’ are building a huge hype for the audio through their unique promotional strategy. Since yesterday, the team members are unveiling small video teasers of the film’s songs, which are being highly appreciated by Akkineni fans.

Yesterday, the first video song ‘Nacchite Ye Panaina’ was unveiled and fans were amazed at Naga Chaitanya’s dancing and today, a funky romantic number ‘Okariki Okaram’ was released to a thumping response. The makers will be launching one song each day until the audio release on 3rd April.

MR Sunny is the film’s music composer and Sudheer Varma directs the film which is being produced by BVSN Prasad. ‘Dohchay’ will have its theatrical release on 17th april.