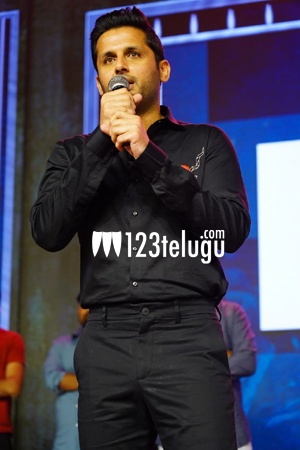 Speaking at tonight’s pre-release event of his soon-to-release courtroom drama, Check, hero Nithiin was all praise for his director Chandrasekhar Yeleti. Nithiin said that after the event’s chief guest Rajamouli’s rugby film, Sye, many years ago, Check is his second sports film.

“I was lucky to have worked with Chandrasekhar Yeleti sir. I took 15,16 takes on the first day of Check’s shooting. I introspected and unlearnt my old acting style and learnt a new style for Check. I must thank Yeleti sir for teaching me a different style of acting,” Nithin said.

Also starring Rakul Preet Singh and Priya Prakash Varrier in lead roles, Check has been produced by Anand Prasad under his banner Bhavya Creations. The film is scheduled for a February 26th release.