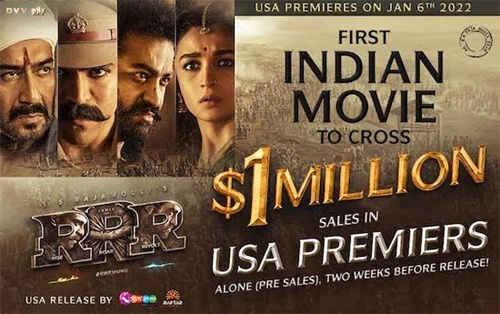 Unprecedented Demand For RRR US Premieres, $1 million From Pre-Sales Already!

Sarigama Cinemas and Raftar Creations are bringing RRR, Indian Cinema’s most awaited film, to the USA.

The distributors have charted the biggest ever release for India’s biggest action drama. There is a massive demand for the movie tickets and in just 24 hours after the bookings started, the movie already clocked one million dollars gross with the premiere more than a fortnight away.

The pricing of the tickets is kept reasonable so film enthusiasts can watch India’s biggest drama on the big screen with their family and loved ones. A humongous release has been planned to match and showcase the scale of RRR to the world.

Due to the unprecedented demand, patrons are requested to book their tickets in advance to enjoy the action extravaganza on the Premiere day. Also, the movie is being offered in Premium large formats to provide the audience a unique, unparalleled and unmatched theatrical experience.

It is rare to watch two of India’s biggest mass stars come together under one of India’s most sought directors. So what are you waiting for? Book your tickets immediately!