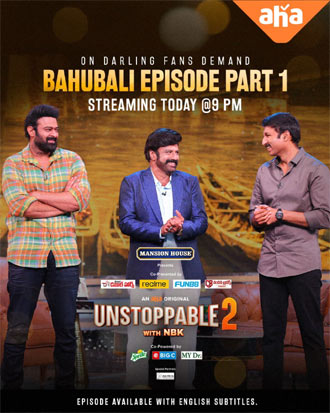 Here is an interesting update for the diehard fans of Prabhas, the pan-Indian star. Aha took to its social media accounts and announced the release time of the ‘Baahubali’ episode (part 1) in the most popular OTT talk show, Unstoppable With NBK S2.

The OTT platform has announced that the episode, featuring Prabhas and Gopichand, will premiere tonight at 9 PM. Fans are quite happy with the preponement of the episode’s release.

The teaser which was released yesterday garnered a solid response from the netizens. Fans are eagerly waiting to know how the interaction between Prabhas, Gopichand and Balakrishna will be. Keep checking to get more interesting updates.