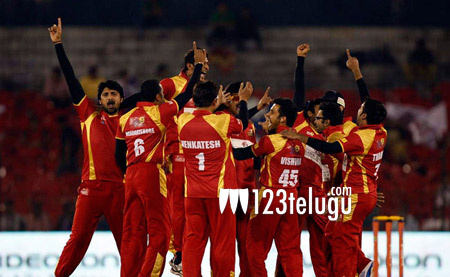 With the added confidence of securing their berth in the semifinals in the 5th edition of the Celebrity Cricket League, the Telugu Warriors team seems unstoppable. In a nail biting match against another semifinal team, Karnataka Bulldozers, the Telugu Warriors recorded a handsome win and bettered their position with three straight victories.

After batting first, the Karnataka Bulldozers led by Sudeep of ‘Eega’ fame, set a mammoth 187 run target for the Telugu Warriors. The Telugu Warriors proved their might by recording a thumping victory in an exciting finish.

Chasing the target, Prince (67 runs off 46 balls), Sudheer Babu (39 runs off 26 balls) and Sai Dharam Tej (21 runs off 8 balls) sizzled with their scintillating knocks and led the team to a sensational victory. Prince was awarded the Man of the Match trophy.