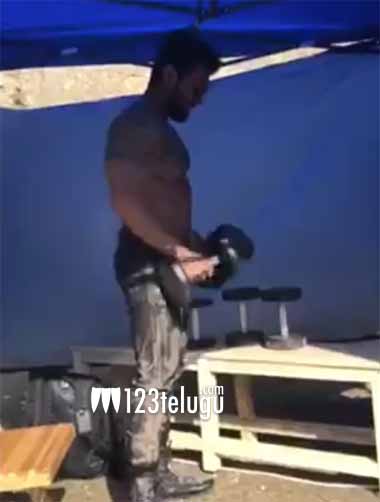 Ram Charan’s shirtless avatar has become a rage all over in the film Vinaya Vidheya Rama. Now, Charan’s wife, Upasana shared a workout video on social media which is going viral.

Seen here in the video is Charan prepping before his gripping action scene. The temperatures in Azerbaijan where the film was shot were very cold but Charan is seen going all out for the shoot.

Also, seen is Charan’s trainer Kunal who is helping him. VVR is directed by Boyapati Sreenu.

My RAM-bo working out on set before a tough action sequence. It’s freezing & he’s shirtless – Mr C ur a true hero 😘🥰💪🏻 – @kannan_kanal thanks for keeping him company 👍🏻 ur fights r super 👌🏻 #RamCharan pic.twitter.com/dHBmcwX0HJ