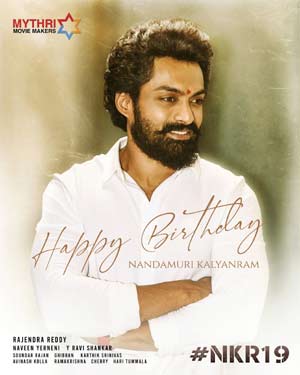 Hero Kalyan Ram’s film under leading banner Mythri Movie Makers’ production had its formal launch in February this year. However, the film’s shooting has been delayed due to the lockdown. The film marks the Nandamuri hero’s 19th project in Tollywood.

Kalyan Ram celebrates his birthday today and the makers released a special poster to wish him. The poster reveals that more updates on the Kalyan Ram-Mythri Movie Makers’ film will be out soon, hinting that the shooting might commence soon. A debutant named Rajendra will be directing the film, which is touted as an out-and-out entertainer. Stay tuned for further details.