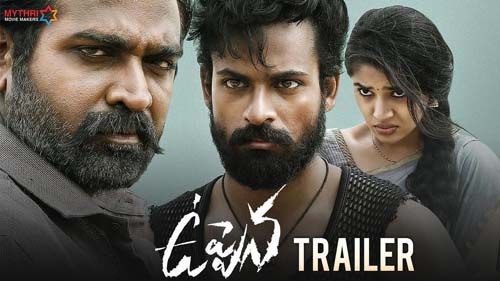 Hero NTR has just launched the theatrical trailer for the upcoming romantic drama, Uppena. The trailer showcases an intense love saga of a young couple, played by debutantes Vaishnav Tej and Krithi Shetty. The conflict in this beautiful seaside romantic drama arises in the form of Vijay Sethupathi.

Uppena’s trailer hints that the love story of its lead couple will be as legendary as that of Laila-Majnu and Devdas-Parvati. Needless to say, the film might have a sad ending. While Vishnav Tej plays a young man from a poor fisherman’s community, Krithi plays a spirited young girl from a powerful village-head’s family.

Shamdat’s poignant visuals and Devi Sri Prasad’s haunting soundtrack will be some of the main highlights of the film. Debutant director Buchi Babu Sana seems to be coming up with a promising film. Mythri Movie Makers and Sukumar Writings banners jointly produced the movie, which is hitting screens on February 12.