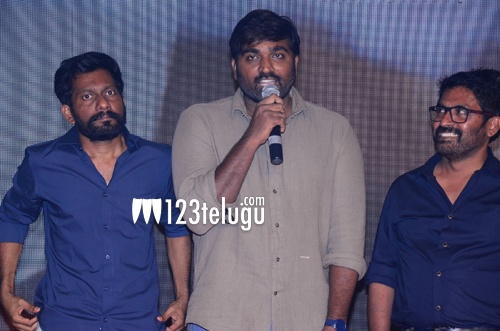 Speaking at Uppena’s pre-release event tonight, the film’s main antagonist acclaimed Kollywood star Vijay Sethupathi had some nice things to say about the film and its director Buchi Babu Sana. Vijay said that Uppena is a dream come true for Buchi.

“Buchi is a very emotional person. He captured the soul of Uppena’s script very well. I wish the debutants Vaishnav Tej and Krithi Shetty all the best. I love Chiranjeevi sir a lot and he always showers his love on me since Sye Raa. I specially thank Telugu audiences for supporting cinema after Corona. They just made Krack a big hit,” Sethupathi said.

Uppena, produced by Naveen and Ravi under Mythri Movie Makers banner, has its music composed by Devi Sri Prasad. The film is slated to hit screens on February 12.