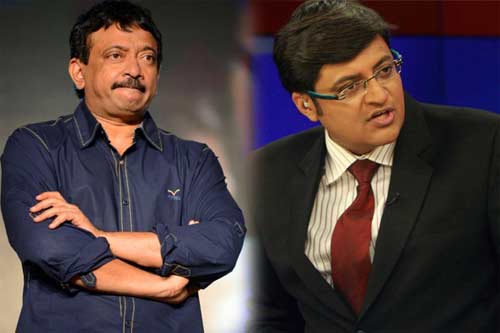 Ever since Sushanth Singh has passed away, the media has taken up the case in a big way and especially, Arnab Goswami from the republic channel is making some very strong statements against Bollywood calling it a place where gangsters, rapists and psycos operate.

In a series of tweets, RGV demands big stars like Salman, Shahrukh and top production houses in Bollywood to speak up and take on people like Arnab in the media. If this was not enough, he has also decided to make a film on Arnab himself calling him the news prostitute.

There is nothing new in RGV making films on controversial people, but knowing Arnab Goswami, we need to see how he responds to all these rants by RGV.

Was shocked to see #ArnabGoswami talking about Bollywood in such a horrible way ..He calls it the dirtiest industry ever with criminal connections ,it’s full of Rapists, gangsters, sexual exploiters and what not?

And why the hell are you guys #AdityaChopra , @karanjohar , @MaeshNBhatt @iamsrk @BeingSalmanKhan and so many others are so scared of the barking #ArnabGoswami that u are hiding under the tables of ur plush offices ???

I believe that #ArnabGoswami has no other agenda but to come across like the ultimate hero a Dabaangish Salman Khan, kind by making all the film industry biggies to run for cover and for that purpose he will MURDER TRUTH

My film on him is titled

“ARNAB”
THE NEWS PROSTITUTE
After extensively studying him I mulled on whether the tagline should be The News Pimp or The News Prostitute though both are relevant I finally settled on prostitute for its sound.

Hey #ArnabGoswami whether u react to my film or not I don’t care a damn because my target audience is not going to be u , but it will be ur viewers ..I want to shake them up with the way I will expose in my film the back of ur public face in Republic Tv