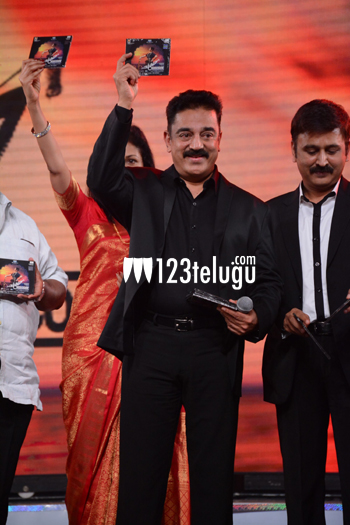 Kamal Haasan has always been a cut above the rest in film making and his films stand as a fine example for innovative ideas. Continuing this reputation, Kamal launched ‘Uthama Villain’s audio in style. Unlike the usual release of audio cds, Kamal’s team created a mobile app and uploaded the audio files onto the app.

On the film’s producer Linguswamy’s request to present the album to any of the guests, Kamal called his daughter Shruti Haasan who was not present at the launch and sent her the album through FaceTime, a video telephony technology.

Composed by young music composer Ghibran of ‘Run Raja Run’ fame, ‘Uthama Villain’ comprises of 16 scintillating tracks which are already winning appreciation. The film is all set to release on 2nd April.