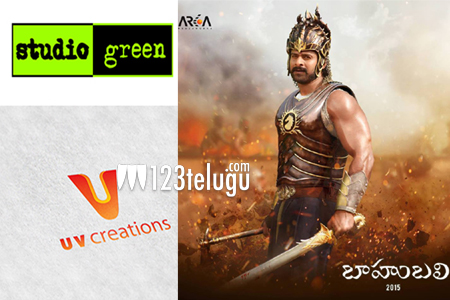 S S Rajamouli’s magnum opus, Baahubali is getting bigger day by day. Never has any film in the history of Tollywood, got such hype and hysteria. All those who are connected with this film are living a dream by working with the genius Rajamouli.

Now, according to the latest update, the Tamil distribution rights of Baahubali have been bagged by UV Creations in association with Studio Green banner for a whopping price. While UV creations made hit films like Mirchi and Run Raja Run in Telugu, Studio Green is one of the leading production houses in Tamil.

Shooting of the film is currently on and the movie is slated to release in two parts. Prabhas, Rana Daggubatti, Anushka and Tamanna play major roles in this film which has music by M M Keeravani.