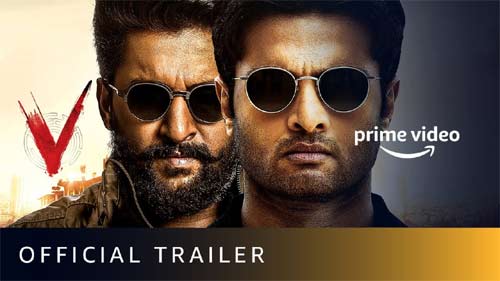 Fans were a bit disappointed when they came to know that Nani and Sudheer Babu’s V would not have direct theatrical release as of now. But the makers are not leaving any stone unturned and are promoting the film in a big way.

The trailer is out and it looks rocking. Nani is being showcased in a never before seen avatar in the film and this looks super in itself and raises the curiosity right away.

Sudheer Babu is seen as the cop who is after Nani and he too looks suave in his cop’s role. The visuals, setting, and scale of the film look really big and after a long time, we get to see a good popcorn kind of a film ready to enthrall the audience on the 5th of Sep on Amazon Prime.

The heroines, Nivetha is paired opposite Sudheer Babu and Aditi Rao is missing in the trailer giving the hint that she is the main link in the film because of whom the story kicks off.

Dil Raju has spent a bomb on the film and mostly it is so good to see director Mohana Krishna Indrganti set up such an interesting film where everyone has a good role.

The only thing that comes to our mind after seeing the trailer is such films should be watched on the big screen. But nevertheless, V has surely evoked a high in these dull and boring times of Corona.