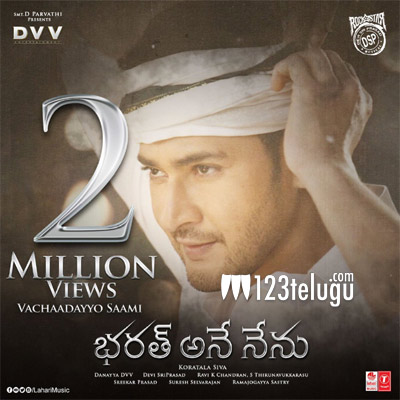 Looks like there is no stopping Devi Sri Prasad as he has made a habbit of giving back to back super hit songs. Just as everyone has been praising his work in Rangasthalam immensely, he has now come up with good songs in Bharath And Nenu.

The third song from the film, Vachadayyo Saami was released yesterday and became an instant hit with the listeners. Within no time, the song has clocked 2 million digital hits online. This clearly shows the manner in which the song is being liked by one and all.

The stage is set for the massive pre-release event of the film which will happen tomorrow in Hyderabad. With the film set to hit the screens on the 20th of this month, DSP has surely raised the buzz for the film with his hit music score.