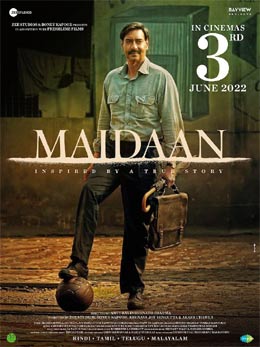 Maidaan is a film that is being produced by Vakeel Saab producer Boney Kapoor. Inspired by an incredible true story about an inspiring coach who introduced Indian Football to the world, Maidaan pays tribute to the golden era of Indian football starring Ajay Devgan.

Directed by Amit Ravindernath Sharma of blockbuster Badhai Ho fame, Maidaan has been with football backdrop with true events from 1952-62, the Golden Era of Indian Football.

Now Producer Boney Kapoor announced that the film is all set to release on 3rd June 2022 in Hindi, Telugu, Tamil, and Malayalam languages. The film has been delayed for over a year now.