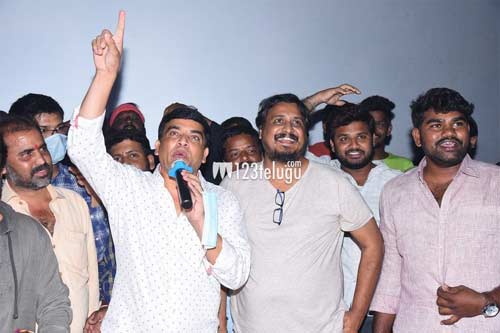 The most eagerly awaited theatrical trailer for Pawan Kalyan’s comeback film, Vakeel Saab, was launched at 6 PM this evening amid a lot of fanfare at several select theaters across the twin Telugu states. In Hyderabad, fans bursted crackers and celebrated the trailer launch at Sudarshan Theater at RTC X Roads. Dil Raju, director Sriram Venu and other crew members took part in the celebrations.

Speaking on the occasion, Dil Raju said that the response for Vakeel Saab’s trailer has been amazing. “It’s been 3 years since we saw this kind of euphoria. The trailer is just the breakfast. Let’s all have lunch and dinner together when the film hits screens on the April 9.

Director Sriram Venu started his speech chanting “Jai Pawan Kalyan”. “Did you all like the trailer? Well, the film will be much better than the trailer. Your celebrations will double on the 9th of April. Be prepared for it,” he told the elated fans.